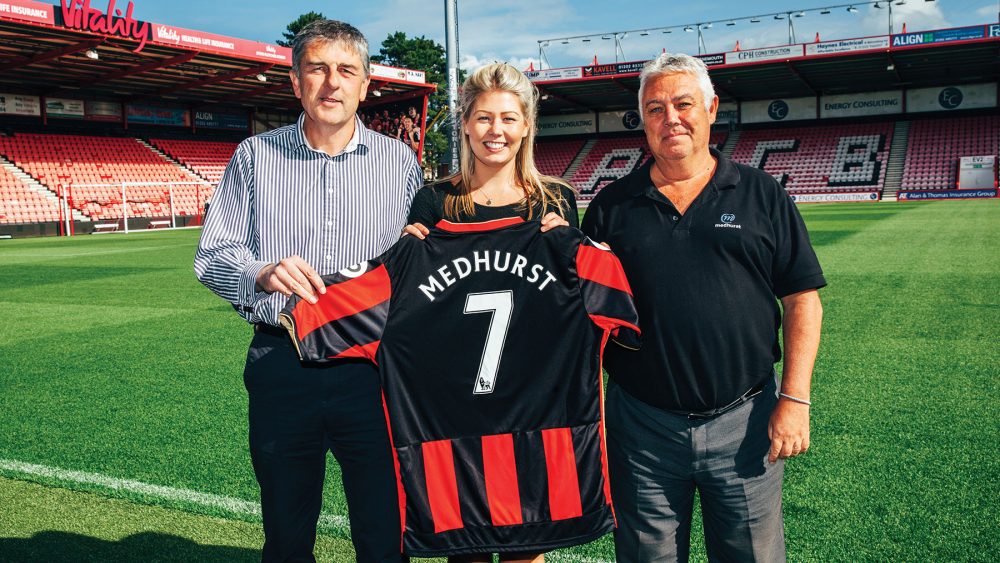 Local technology support service specialists, Medhurst Communications, has signed as AFC Bournemouth’s official IT Partner for the 2015/2016 season and replaced the club’s entire IT infrastructure to support its new position in the Premier League.

With the promotion to the Premier League, AFC Bournemouth had to comply with very exacting media and technology requirements and the new system, based on HP technology, now offers next generation technology befitting a club in the top flight. The new system offers increased network efficiency and speed, and resilient, fast, secure and guaranteed internet access for over 60 members of the media.

The new media facility requirements included an integrated fibre optic and copper cabling network to provide both wired and wireless internet connectivity for all visiting UK and International broadcasters and data ports and connection points for all media conference rooms, outside broadcast compounds, tunnel interviews and pitch side presentations. With internet connectivity bandwidth of 40MB per second, burstable to 100 MB per second, the club has dramatically improved the internet service for all broadcasters.

The new IT infrastructure also comes with a lifetime warranty and the best of breed HP switching technology across the entire site and a purpose built air conditioned comms room containing four racks housing all the new HP servers and switches. Medhurst staff will also continue to support the AFC Bournemouth IT staff on site.

The club will also be using the new technology to support its community and engagement projects and to be able to work closer with local businesses.

Cherries commercial director Rob Mitchell, “We were very impressed by Medhurst’s proposal and understanding of our new media and technology requirements for the Premier League. They have delivered an exciting and innovative solution and we’re already seeing huge benefits with faster access to applications and resilient, high-speed internet connectivity for our media partners. Medhurst has a longstanding relationship with AFC Bournemouth, having managed the IT behind the scenes and coaching staff for several years. We are delighted that they have become our official IT partner yet again.”

AFC Bournemouth is one of over 450 clients that Medhurst serve in the south. As part of the agreement, Medhurst’s logo will continue to be listed alongside the club partners in the match day programme and they will also attend regular AFC Business events to advise local organisations on how to get the most out of their IT systems.

Managing director of Medhurst Communications Ltd Charlie Baynes added, “We’re delighted to be supporting AFC Bournemouth again for this season. These are very exciting times for the club and we’re proud to be able to play a part. The new IT system brings AFC Bournemouth into the Premier League with the latest media and IT system specifications and features, offering massive performance improvements across all areas of the network. We will also be hosting a number of IT events at the stadium over the season for the local business and education community, demonstrating how the latest media and technology solutions can offer significant savings and increased performance for their organisations. We’re proud of our contribution to the local community and are looking forward to supporting AFC Bournemouth in the Premier League this season.”