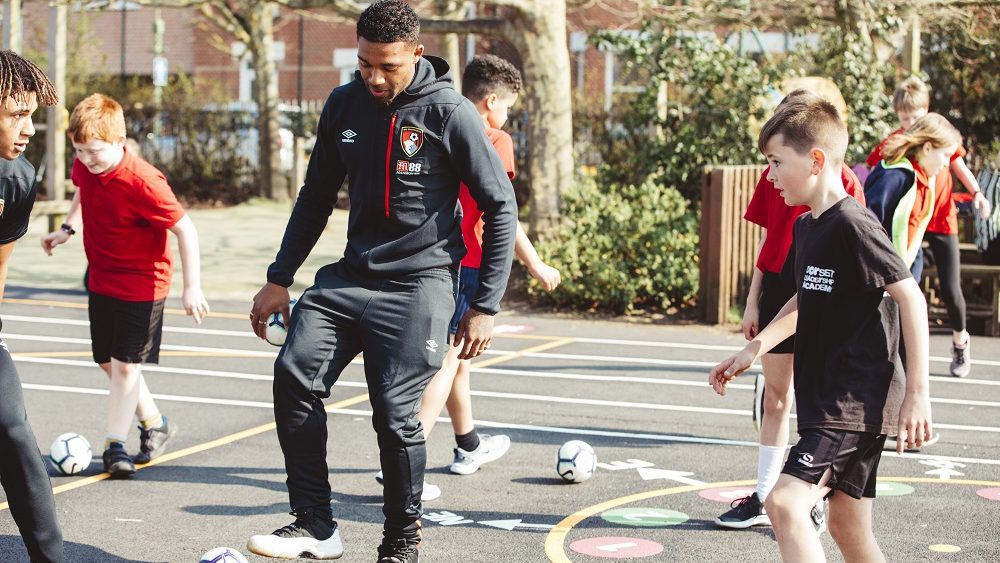 Nathan Ake and Jordon Ibe joined in with the Premier League Primary Stars session at Pokesdown Primary School as the students built their footballing skills further under the guidance of two Cherries players.

Medhurst sponsors the AFC Bournemouth Community Sports Trust’s in the Primary Stars initiative, which looks to inspire children to learn, be active and develop important life skills through football.

Head of community Steve Cuss spoke about the fun-filled afternoon: “We’ve been at a Premier League Primary Stars project at Pokesdown Primary School. We’ve been taking a PE session as we do across all Bournemouth and Poole schools and we’ve been very fortunate that we’ve had Nathan and Jordon join us this afternoon to take part in the lesson.

“Nathan and Jordon have been fantastic, Nathan’s the ambassador for the project and he’s supported it right from September and the start of the school year and has been to a number of different sessions.

“It’s always special when they come along and join in, the kids have been really good advice and it’s been a really good afternoon.

“We’re really grateful to Medhurst IT, we’re in and out of schools as often as we can be. Today we’ve been in 20 different schools delivering the Primary Stars project and we’re really glad for Medhurst IT’s support with that.”

Ake also gave his thoughts after spending time with the students: “It’s always great, we’ve been to sessions a few times now, it’s good to see the children smiling and being able to interact with them.

“There was some talent out there, there were a few kids who were really good, but the main thing is that everyone enjoys themselves and we joined in a few little games. People were showing they’re little tricks and that was great to see.”

Charlie Baynes from Medhurst IT said: “We’re delighted to support the Premier League Primary Stars programme, as we have in recent seasons. When you see the energy of the students involved here today it shows you what an exciting time it is for football in the area, and we are happy to be a part of that.”

Premier League Primary Stars is available for children aged five-11 and teachers also receive a pack containing lesson plans which can be used throughout the school.

The Premier League Primary Stars programme is free to all schools in Bournemouth, Poole and East Dorset with additional extras also available at cost.

To find out how your school could benefit from the programme, contact AFC Bournemouth’s Primary Stars project lead Matt Divine: matt.divine@afcb.co.uk or call 07393 462167.

The project also has its own website: www.plprimarystars.com which contains resources for teachers and parents on subjects including maths, literacy and PE. It’s free to sign up and join.